I have been busy with other parts of my life and have had little time and energy to share. There are things to come..but first I feel sharing my father's close encounter is important to me.
I have not yet shared this encounter on my site.

Do close encounters run in the family? I will share my thoughts after you learn of my Dad's near sighting.
The first time in his 70 years of life that he saw anything of the sort.

The encounter takes place in Saskatoon Saskatchewan early December of 2005...and these are my father's words..

I was in Saskatoon traveling north along the South Saskatchewan River and going home when I turned west onto ravine drive and drove about half way up the hill. That is when I first noticed something to the southwest of me, an object that was all lit up .
It was not moving when I first saw it. So my first thought was that it was a brightly decorated spruce tree for Xmas.

I quickly realized that it was approximately 50 feet off the ground and hovering in the sky without support. It was no more than a city block away from me.
Things quickly settled in as the realization of what I was looking at was not normal..It still shocked me, after I had another good look at it.

In the sky I saw what appeared to be a craft that looked almost tear shaped but sideways and flat edges.

I slowed the vehicle down to a crawl and watched the UFO hovering for about 10 seconds. I rolled down my window to get a more clear view and to check if I could hear any sounds from it.

I could  see the outline of the craft by its multicolor lights that surrounded the object. I could not see what color the craft itself was nor could I see anything jutting out, as it was too dark out.

Still thinking rational and trying to make sense of what it was that I was looking at, I then thought maybe a helicopter.
It was a fleeting thought though as I knew it could not be that.. helicopters make a lot of noise and there was none. Even the trees near the object were not moving from any wind either.
Also in that fleeting moment I remembered that the local police and emergency service do not have a helicopter for Saskatoon.

What I did see,  looked like the body of the craft had only straight lines to it, no curves just straight lines. The glare of the lights prevented me from seeing the actual structure itself. 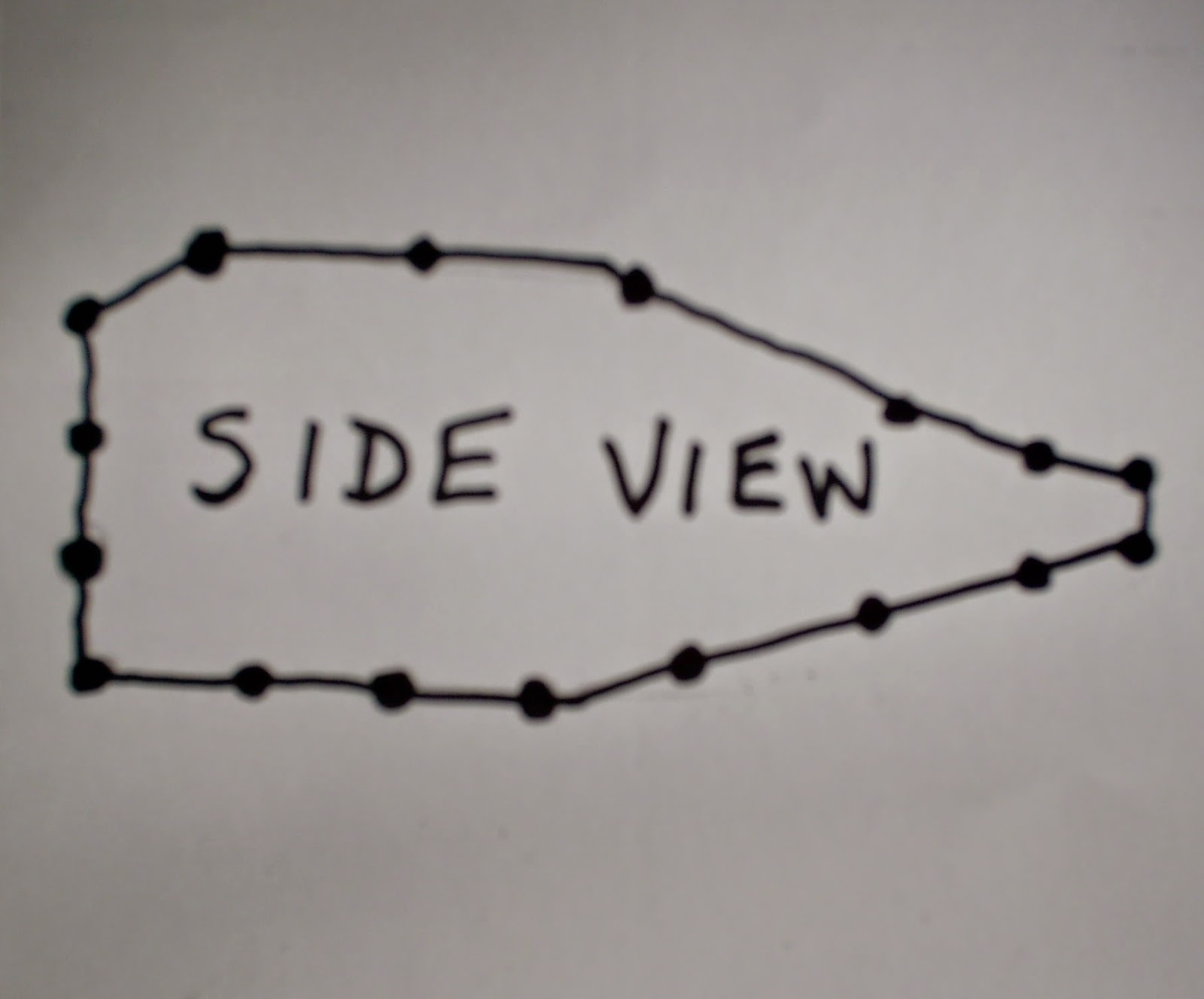 My heart was now racing as I was moving the car very slowly. I was now side by side with the object and I could tell that it was creeping very, very slowly ahead with me.

The UFO then banked slightly turning slight to the south. After about 10 seconds the object banked sharply to the direct south, giving me full view of the bottom of the craft.
Still there was no sound from the craft. It slowly descended down the other side of a hill that it was now above. It then headed down toward the river.

It was less that a block away at all times, as I slowed down to a crawl.
It did not vanish quickly, but it moved at a very slow pace. When it slowly disappeared from the top of the hill and headed down toward the river, that is when I lost sight of the object.

The entire sighting took about 15 to 20 seconds with no sounds ever coming from the unknown craft .

I do feel that when I slowed down more..That it (they) took notice to me observing them, and that caused the unknown to start its sharp bank and then slowly leave.

When the craft left, it was going about 5 mph as if it was looking for something as it was leaving.

I did make a couple quick drawings of the craft.

The black dots on the pictures represent the placement of the multicolor lights on the craft as I saw it. 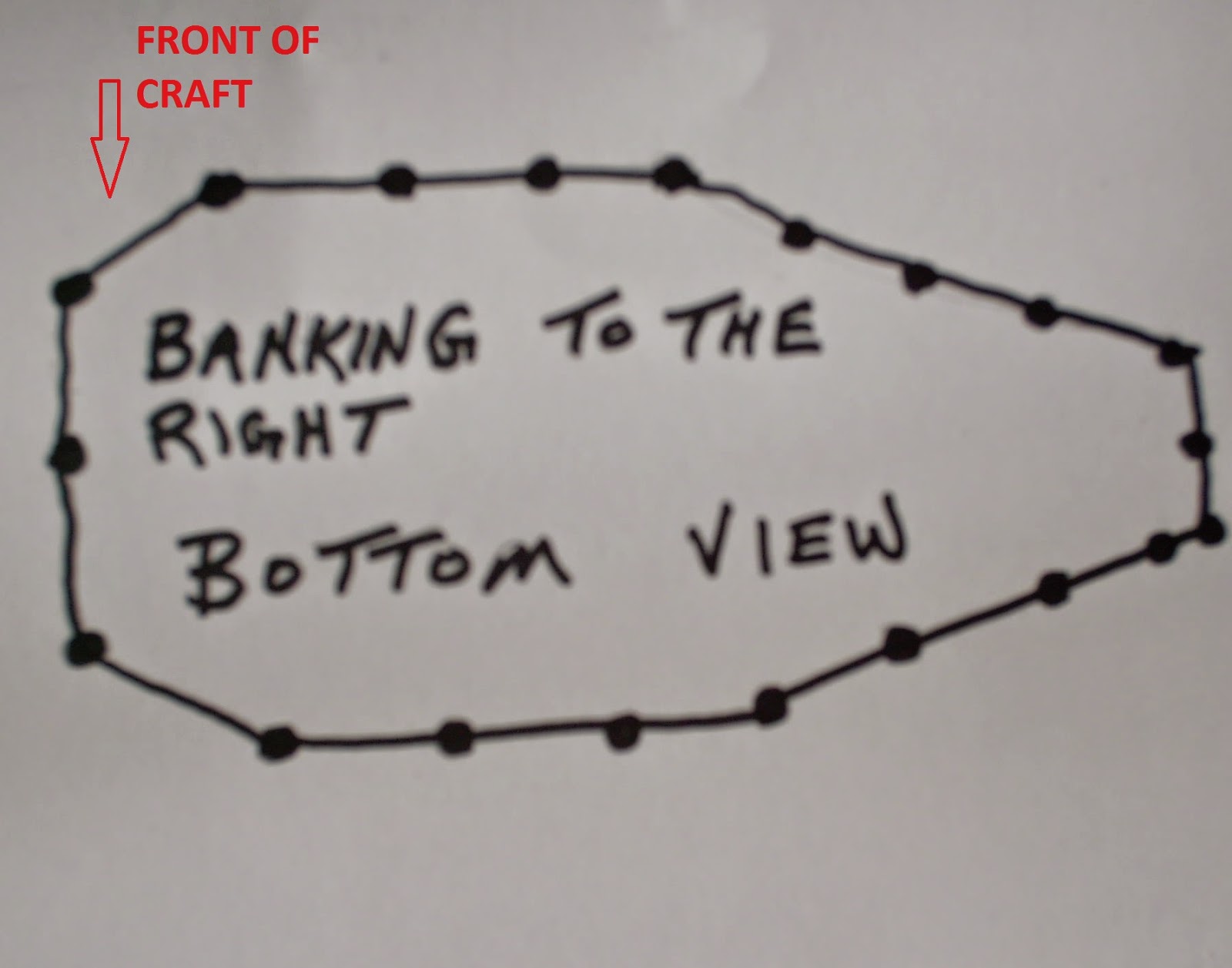 It seemed that the front of the craft was the larger part, the cockpit area so to speak. The narrow part was the rear of the UFO..That is what I am assuming from how it flew as I watched the craft in motion.

After watching this unknown leave as it did, it seemingly continued in search of whatever they were looking for.

I feel it was not ours and had to ask myself,  How is this real? How can this be?

It was all very weird to me.

My Father has listened to my own encounters in the past..but I could read him much like a book. I understood he never really accepted what I said to be real. Being his son..he just ``accepted`` what I told him but never beleived me..until his own eyes were opened...at close range.

Now an interesting part to "if it runs in families".

As mentioned  in past posts..I am adopted and not of blood relationship..yet my adopted father whom I have known all my life and spent a life with..had his own close encounter.
That solidifies one thing to me for certain..Not only can blood families be tied to it...but people who are close to an abductee may also experience close encounters and sightings. I do also have close friends who have seen with their own eyes but not before my encounters started again..only after..

When eyes are opened....they can never be shut again.


I hope you all have the oppertunity to observe something that will change the way you look at the world...It will open your eyes..to so much more.

Translate Taken By The Greys

My Thoughts / Discoveries On Close Encounters With UFO / ET

Taken By The Greys

contact@takenbythegreys.com
or
taken.by.the.greys@gmail.com
Having had close encounters with UFOs and ET (greys) has instilled an urgency within, to awaken others. I am very open for discussion of my events and sightings and I am also here for those who have had their own experiences but have not been able to discuss it with any one.